HDF5 1.10 introduces several new features in the HDF5 library. These new features were added in the first three releases of HDF5-1.10. For a brief description of each new feature see:

This release includes changes in the HDF5 storage format. For detailed information on the changes, see: Changes to the File Format Specification

PLEASE NOTE that HDF5-1.8 cannot read files created with the new features described below that are marked with *.

These changes come into play when one or more of the new features is used or when an application calls for use of the latest storage format (H5P_SET_LIBVER_BOUNDS). See the RFC for more details.

The following important new features and changes were introduced in HDF5-1.10.8. For complete details see the Release Notes and the Software Changes from Release to Release page.

The following important new features and changes were introduced in HDF5-1.10.7. For complete details see the Release Notes and the Software Changes from Release to Release page.

HDF5 now supports building with the AEC library as a replacement library for SZip.

Addition of the Splitter and Mirror VFDs

Two VFDs were added in this release:

Performance has continued to improve in this release. Please see the images under Compatibility and Performance Issues on the Software Changes from Release to Release page.

Several hyperslab selection routines introduced in HDF5-1.12 were ported to 1.10. See the Software Changes from Release to Release page for details.

The following important new features and changes were introduced in HDF5-1.10.6. For complete details see the Release Notes and the Software Changes from Release to Release page:

Improvements to the CMake Support

Several improvements were added to the CMake support, including:

Two Virtual File Drivers (VFDs) have been introduced in 1.10.6:

Performance was improved when creating a large number of small datasets.

The following important new features were added in HDF5-1.10.5. Please see the release announcement and Software Changes from Release to Release page for more details regarding these features:

The following APIs were introduced to support this feature:

A change was added to the default behavior in parallel when reading the same dataset in its entirety (i.e. H5S_ALL dataset selection) which is being read by all the processes collectively. The dataset must be contiguous, less than 2GB, and of an atomic datatype. The new behavior in the HDF5 library uses an MPI_Bcast to pass the data read from the disk by the root process to the remaining processes in the MPI communicator associated with the HDF5 file.

A CFD application was used to benchmark CGNS with:

These results were reported by Greg Sjaardema from Sandia National Laboratories. 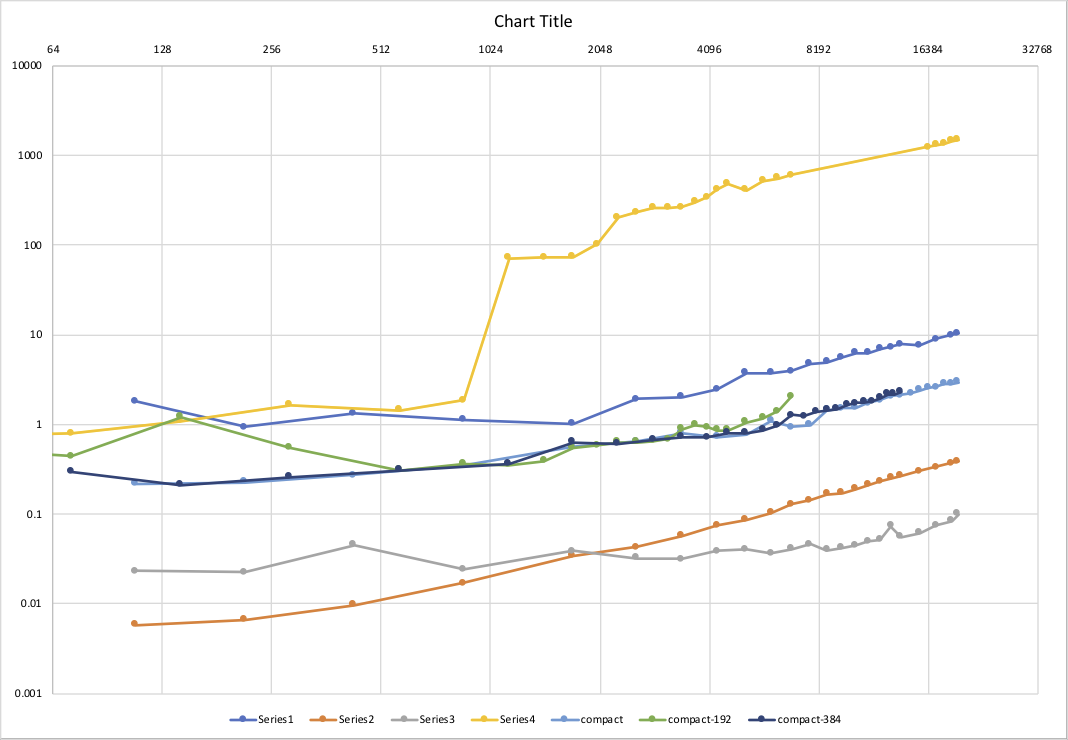 The last 3 “compact” curves are just three different batch jobs on 192, 384, and 552 nodes (with 36 core/node). The Series 2 and 3 curves are not related to the CGNS benchmark, but give a qualitative indication on the scaling behavior of MPI_Bcast. Both read-proc0-and-bcast and compact storage follow MPI_Bcast’s trend, which makes sense since both methods rely on MPI_Bcast. (See the RFC for better resolution.)

New functions were added to find locations, sizes and filters applied to chunks of a dataset. This functionality is useful for applications that need to read chunks directly from the file, bypassing the HDF5 library.

Several important features and changes were added to HDF5 1.10.2. See the release announcement and blog for complete details. Following are the major new features:

Optimizations were introduced to parallel HDF5 for improving the performance of open, close and flush operations at scale.

HDF5 parallel applications can now write data using compression (and other filters such as the Fletcher32 checksum filter).

HDF5 metadata is typically small, and scattered throughout the HDF5 file. This can affect performance, particularly on large HPC systems. The Metadata Cache Image feature can improve performance by writing the metadata cache in a single block on file close, and then populating the cache with the contents of this block on file open, thus avoiding the many small I/O operations that would otherwise be required on file open and close.

The HDF5 library's metadata cache is fairly conservative about holding on to HDF5 object metadata (object headers, chunk index structures, etc.), which can cause the cache size to grow, resulting in memory pressure on an application or system. The "evict on close" property will cause all metadata for an object to be evicted from the cache as long as metadata is not referenced from any other open object.

Small and random I/O accesses on parallel file systems result in poor performance for applications. Page buffering in conjunction with paged aggregation can improve performance by giving an application control of minimizing HDF5 I/O requests to a specific granularity and alignment.

Data acquisition and computer modeling systems often need to analyze and visualize data while it is being written. It is not unusual, for example, for an application to produce results in the middle of a run that suggest some basic parameters be changed, sensors be adjusted, or the run be scrapped entirely.

To enable users to check on such systems, we have been developing a concurrent read/write file access pattern we call SWMR (pronounced swimmer). SWMR is short for single-writer/multiple-reader. SWMR functionality allows a writer process to add data to a file while multiple reader processes read from the file.

Calls for HDF5 metadata can result in many small reads and writes. On metadata reads, collective metadata I/O can improve performance by allowing the library to perform optimizations when reading the metadata, by having one rank read the data and broadcasting it to all other ranks.

Collective metadata I/O improves metadata write performance through the construction of an MPI derived datatype that is then written collectively in a single call.

Usage patterns when working with an HDF5 file sometimes result in wasted space within the file. This can also impair access times when working with the resulting files. The new file space management feature provides strategies for managing space in a file to improve performance in both of these arenas.

With a growing amount of data in HDF5, the need has emerged to access data stored across multiple HDF5 files using standard HDF5 objects, such as groups and datasets, without rewriting or rearranging the data. The new virtual dataset (VDS) feature enables an application to draw on multiple datasets and files to create virtual datasets without moving or rewriting any data.

New options for the storage and filtering of partial edge chunks in a dataset provide a tool for tuning I/O speed and file size in cases where the dataset size may not be a multiple of the chunk size.

In addition to the features described above, several additional new functions, a new struct, and new macros have been introduced or newly versioned in this release.

Changes to the File Format Specification

The file format of the HDF5 library has been changed to support the new features in HDF5-1.10.

See the HDF5 File Format Specification for complete details on the changes. This specification describes how the bytes in an HDF5 file are organized on the storage media where the file is kept. In other words, when a file is written to disk, the file will be written according to the information described in this file. The following sections have been added or changed:

HDF5-1.8 cannot read files created with the new features described on this page that are marked with *.